Life is Feudal features a highly customizable interface that should be suitable for every type of player.

Pressing ESC opens up the menu page with settings for video, audio, and where players can control key binds for in game actions.

By pressing TAB (default), the player can switch between 2 major interface modes:

Press F10 (default) to enter UI customization mode. You can rearrange and add new abilities on your hotbar from a skill book in the UI customization mode. In addition, all windows can be dragged around the screen and most of them can be re-sized. The chat and hotbar tabs can also be dragged outside their windows which will result the creation of new chat or hot bar windows which can be moved and re-sized accordingly. 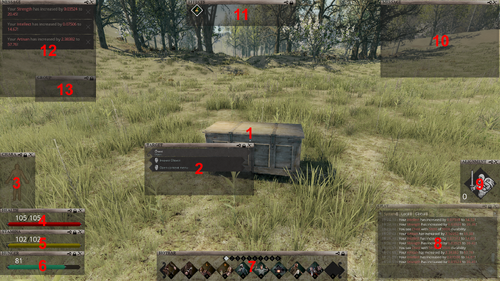 Almost all interface windows have 3 system buttons which appear in the upper right:

Description of interface elements on the screenshot:[]